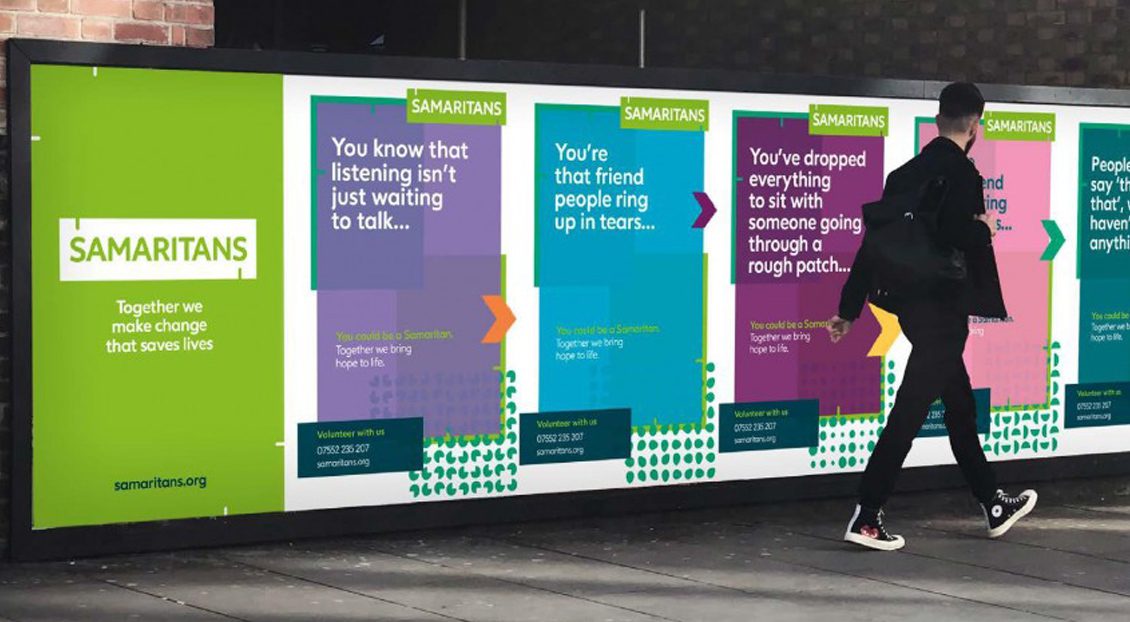 Samaritans have been given a new identity by Spencer Du Bois in a bid to make it more appealing to a younger audience while also showing what they offer other than their listening service.

Founded in 1953 by part-time cartoonist and vicar Chad Varah, Samaritans were the result of his motivation to offer counselling to his parishioners after he had conducted a funeral for a 14 year old girl who had taken her own life.

Eighteen years after the event he founded the charity to help save the live of more people who were contemplating suicide. The Samaritans now have over 20.000 volunteers across the UK and Ireland and they take a call for help every six seconds on average.

Besides the phone line which is available 24 hours a day and are manned by volunteers, the charity also offers services which include face-to-face, text messaging and email counselling, support and information for people who are struggling or worried about someone they know, in addition to programmes in schools, the workplace, prison and the military.

The purpose of the new branding is to widen the Samaritans range to a large audience, in particular younger people, while also keeping up with other relatable charities, says creative director at Spencer Du Bois, Claire Biscard. 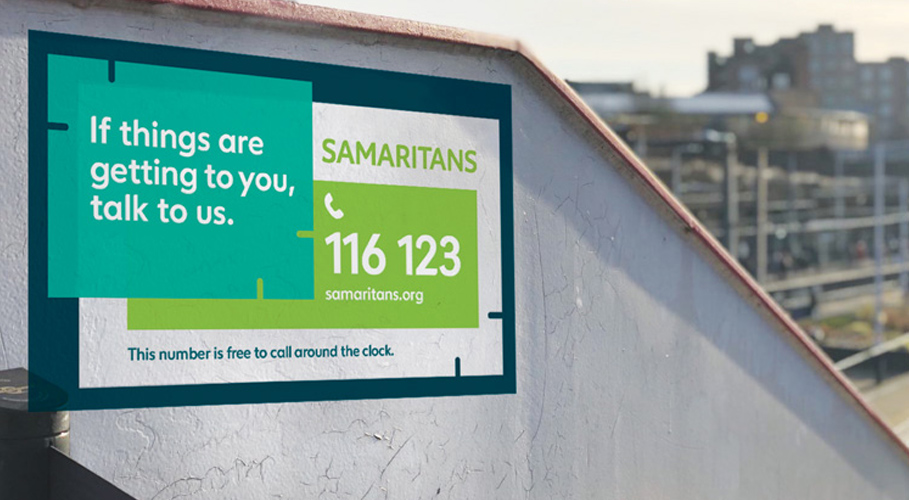 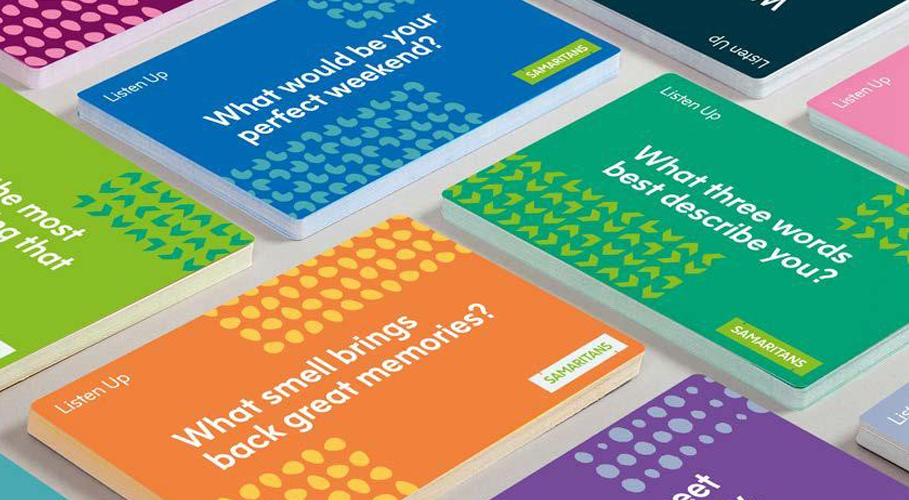 The new identity is also intended to highlight the work the charity do beyond the helpline service, for example suicide prevention groups and online courses, to demonstrate how it “helps people before they reach crisis point”.

“Samaritans has a great history, but it felt dated and narrow, and focused too much on the listening service, when it is so much more than a helpline. It also lacked appeal across digital channels, so we wanted to give it a vibrant and versatile style that could be used across different environments, and animated in future,” says Biscard.

The new branding hones in on “human connections”, says Biscard, featuring a series of connector elements.

The new logo keeps the Samaritans’ green colour for the box in the background but a new bespoke logotype is used set in white against the green background. The colours are sometimes inverted, which depends on the application of the logo. There are now small indents that are present on either side of the background box which represent connectors that would make it possible for them to slot together were it to be printed.

The bespoke logotype is named Varah after the founder of the charity, and can also be found in the bold copy. The typeface contains some “quirky details” within its letterforms, which are intended to give it a “sense of humanity” and mirror people’s “individual personalities”, says Biscard. 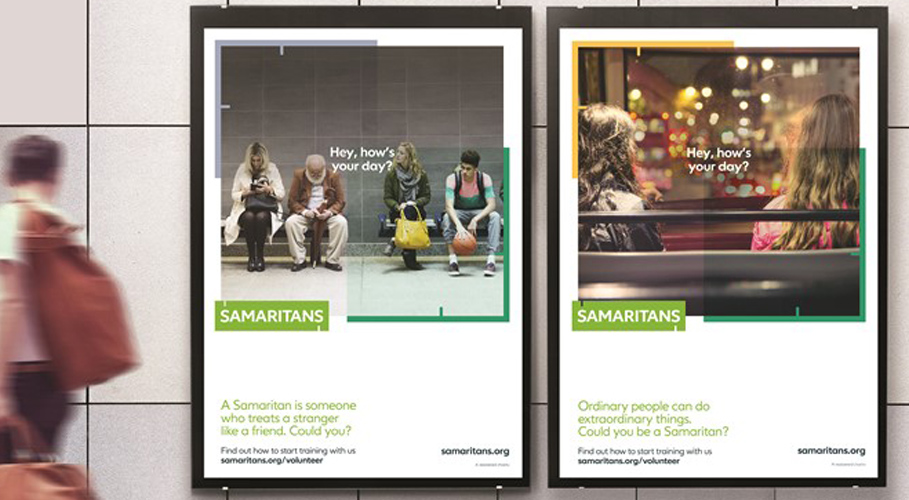 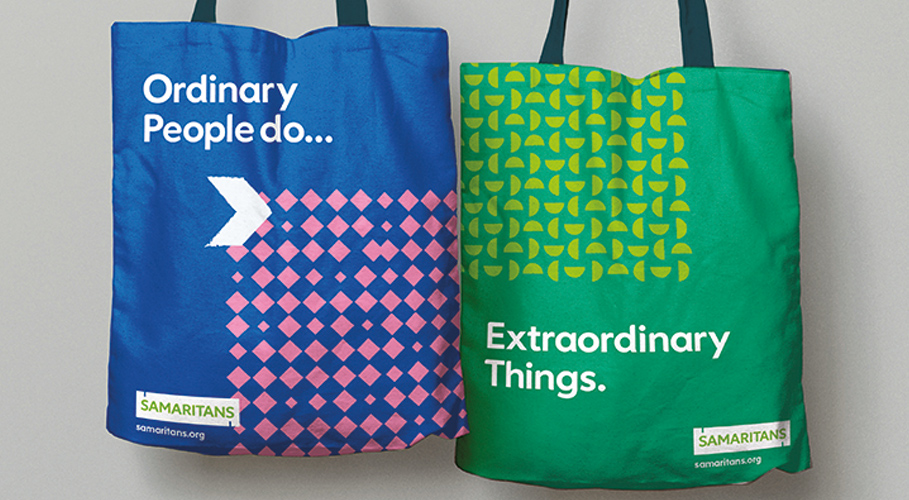 An extended palette has been developed consisting of darker and lighter greens and pastel shades of yellow, orange, pink and purple have been included, as well as an “overlapping graphic” system, where the elements are laid on top of one another on collateral such as posters and marketing materials. The indent system is featured across the whole identity which reinforces the “connector” idea.

A series of other graphical elements such as arrowheads, circles, semi-circles and diamonds have been incorporated into the identity alongside new illustrations that aim to be “vibrant”, says Biscard. New people photography has been used in the rebrand which are meant to show “real life situations” to reiterate “human connection” again.

The tone of voice has also had a workover, which is now looking to be “open, warm and hopeful”, adds Biscard, including phrases such as “ordinary people do extraordinary things”. Animated graphics have not yet been released.

To emphasise the charity’s functions beyond its listening line, marketing now focuses on other services the charity provides such as its events, while also promoting holistic causes, such as lending an ear to listen to others during their daily lives or considering becoming a volunteer.