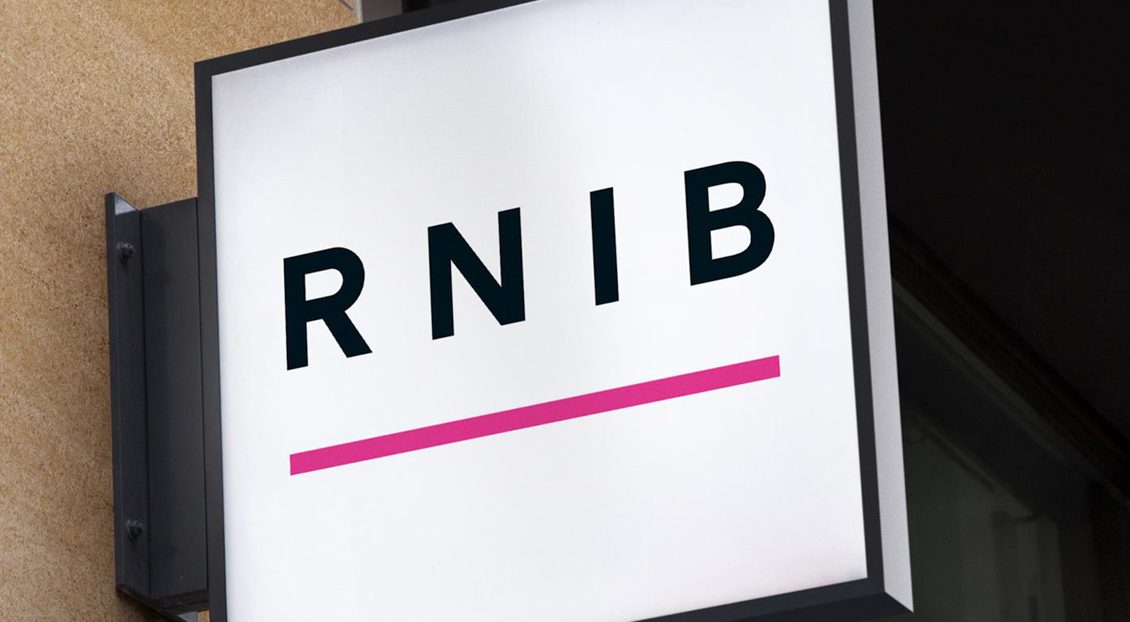 The RNIB, the charity for blind and partially sighted people, have unveiled their new visual identity in its 150th year, created by The&Partnership London.

Head of art at the company Marc Donaldson said he worked alongside the charity and with sight loss impairments to create something that everyone would be proud of.

He added that the charity needed to be put “back on the public radar” and make it more “recognisable”.

“They are helping more than 2 million people across the country with sight loss. It was about connecting with people as a charity. As a charity which works with people who are blind and partially sighted, you want a really readable logo.”” said Donaldson.

Donaldson continued by saying that he met with people from the RNIB. “We started to educate them about the design process, so they could design the logo with me. I wanted it to be a truly inclusive process,” he says.

He went back to look over the logos during the charity’s history, including one that featured a man with a walking stick which read “challenging blindness”. Donaldson said that it was widely agreed this was not “readable”.

The design team also looked at other charity logos such as the RSPCA, the RSPB and the NHS. “The NHS logo looks like it wasn’t designed much, but it was done like that as people don’t like it to look like loads of money has been spent on it. It can also be photocopied lots of times and still be readable, and it is easily applicable across lots of different touch-points.”

They decided that the RNIB logo needed to be designed as a wordmark with was “simple”, “memorable” and “reproducible”, needing to remain just as legible on a billboard as it would be on a business card. 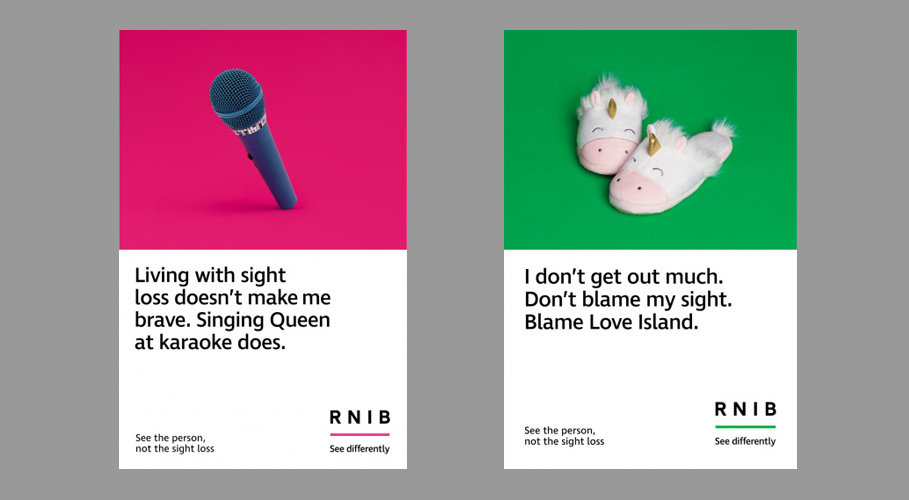 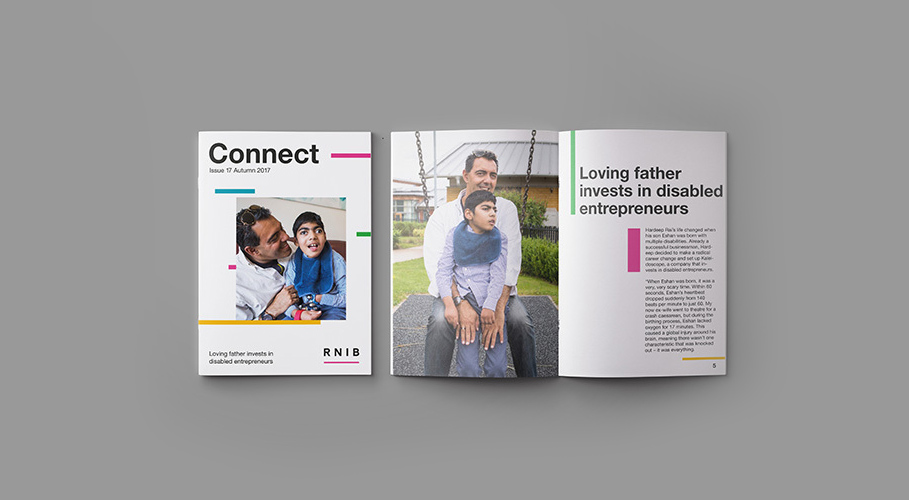 The next stage was to meet with a group of sight loss impaired people for a research session, where Donaldson asked what they wanted from the identity and who he showed a series of designs to.

“What was great is that they were really honest. Some could not see very well at all, some would feel nauseous looking at type for a long time. I showed them about five different types of RNIB logo and asked which is better to look at and which is better aesthetically. We tried different types, fonts, letter spacing…without those research sessions I wouldn’t have been able to do anything as I wanted their opinion to back up everything we did,” said Donaldson.

One of the findings during the session was that they wanted a logo that was more “grown-up” as well as being “easy to read”. “They felt the old rounded typeface was a bit pre-school and felt a bit patronising,” Donaldson says. 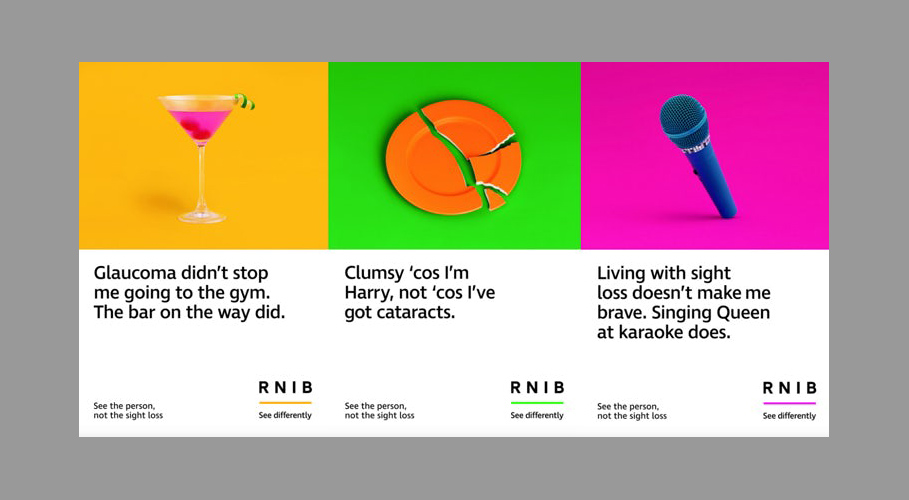 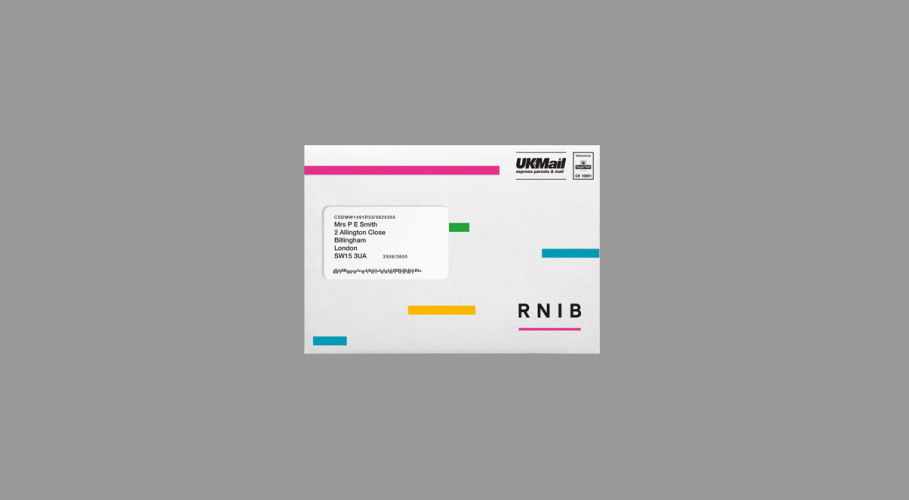 The end result was a black RNIB wordmark, in a sans-serif typeface with increased spacing between the letters and a coloured underline, which are all there to assist those with poor sight.

“The spacing between the letters is functional, it allows the logo to breathe and makes it look like a logo rather than just written letters. It lets a lot of people with sight conditions be able to read it,” said Donaldson.

The underline was created to help people navigate round a page and is in various colours, with the colours an acknowledgment to the different people the charity represents.

The logo is set alongside the new tagline “see differently” written underneath, which is featured on a poster campaign which challenges peoples perceptions of those with sight loss, accompanied by the message “See the person, not the sight loss”, as well as some video adverts.

The identity will be on communications and will be used on signage inside and outside of the building.